Embrace the Dark and Sharing Hailey

I don’t read a lot of romance.  There are, I’m sure, many reasons for this – I’m too cynical (though I prefer the term “jaded realist”), I’m not a fan of euphemistic sex, and I prefer to find my escapism in movies being chief among them.  That said, recently two romance ARCs caught my eye and so, I grabbed both and was pleasantly surprised by both.  So, a two-for-one post this week on adult fiction. 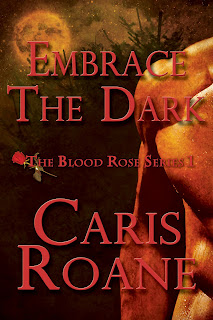 First, “Embrace the Dark” by Caris Roane, the first of what she’s calling “The Blood Rose Series.”  I’d heard of Caris Roane’s vampire series, even started “The Ascension,” but I managed to leave the book somewhere and never finished reading it.  And now I’m rather sad about that, because this novella is delicious.  Roane uses the novella-length perfectly, providing more world-building and development than could be found in a typical short story and yet offering a fun read that does not require the time investment of reading a typical novel.  At around 120 pages, “Embrace the Dark” is an ideal length for an quick escapist read.  The characters are intriguing and definitely not shallow caricatures; instead human Abigail and vampire Gerrod are well-developed, with room and potential growth if they (as I suspect they will) reappear in later series works and even the supporting characters are crafted with a skill and charm that make them memorable.  Their relationship is neither quick nor easy, despite the limits of the novella form, and Roane deftly uses the sexual scenes to expand her story, not merely to titillate the reader.  Culture conflict, family loyalty, personal sacrifice, all of these themes play out as human and vampire attempt to negotiate their unexpected, even undesired, relationship and find happiness with each other.  Richly erotic, yet balanced with both humor and drama, “Embrace the Dark” is an excellent read for fans of paranormal romance looking for a new series to explore.  I eagerly look forward to more.

“Sharing Hailey” by Samantha Ann King was the second romance I picked up for the weekend, intrigued by the idea of a romance featuring a ménage a trois featuring one woman and two straight men.  King handles her topic with skill, combining both two- and three-person sex scenes with good character development and an actual plot to give the story form and purpose.  The emotions of the story ring true – from the family freak-outs over the unusual relationships to the challenges of two straight guys finding themselves sharing unexpected intimacies.  Domestic violence, in the form of Hailey’s ex-boyfriend, is also well-handled, both in the behavior of the abuser and the responses of Hailey and her men in coming to term with the situation.  King’s story could have been over-top melodrama or cheap kinky thrills, but it is neither.  Instead, it’s a well-crafted and enjoyable read, making the unusual seem quite normal.  The story’s unapologetic sexuality never overshadows the character development nor does it ever slip into tawdriness, but instead its eroticism allows the reader to glimpse inside a relationship that may be outside his/her own experience, but in which love is still love.  If I have a complaint at all, it's that there isn't enough sexual exploration, particularly between Mark and Tony, but I accept that not every woman wants that sort of thing in her romance.  Certainly, I was pleasantly surprised by how much I enjoyed this book.

Perhaps my problem with romance has been not that I don’t like it, but that I was reading the wrong romances.  I absolutely enjoyed both of these books and will definitely be considering doing more exploring in this genre.

ARCs received through NetGalley.
Posted by Unknown at 10:57 AM